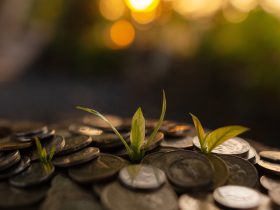 So how do you become a person who doesn’t need to work?! It would be a pretty handy solution for freelancers who’ve given up their nine to five jobs to rely on their ability to be their own boss. Imagine, doing work just because you wanted to produce great freelance pieces, rather than needing to pay the rent or go food shopping!

Step one to becoming financially independent is the first thing everyone assumes you need to do. Unfortunately, there is no rain dance that will bring you wealth, so tightening your budget is a necessity if you want to rely on your own savings in the future.

This might be the thousandth time we’ve said it today, but we’ll say it again for good measure; track your finances! The first step to saving any amount of money is to check where it’s already going.

If you’re spending time in a café to get out of the house on a weekly basis, how much money a month are you spending there? Probably a lot. Can you make coffee at home? You sure can. Get out of the house by going for a walk, or indulging in a free activity, rather than wasting money.

Save With a Friend

If you and your partner have similar attitudes to money, saving just got a whole lot easier. You might not be at your thriftiest at the moment, but once you discuss saving and realise that your techniques are the same, you’re less likely to question and doubt your actions.

If your partner isn’t in the same mind-set it’s not the end of the world, but you may have to put in some extra work. Habits like cutting out your weekly takeaway and going camping rather than splashing out on a summer villa might become a sore spot, so winning your other half round should be top priority.

It’s not common for start-ups to have the luxury of rattling around in a big empty house, so you may not think this applies to you. Downsizing has a lot more to it than just size of property however, and if you’re renting a two-bedroom apartment in Covent Garden the chances are you might just be paying a little more than you need to.

If you’re living in a particularly expensive area where living costs are above average, you should consider if you’ll save by moving to a cheaper area and commuting to where you need to be. While you might love the area you live in, you need to ask yourself; how much you want to live there and how much do you want to be financially independent?

Thrifty calls for being nifty when it comes to scouring the market for a bargain. Don’t be discouraged by wasting a day, you will have to invest time to save money for at least the first couple of weeks. There are tonnes of money saving tips on the web that can cut the odd pound here and there, so if you’re into coupon collecting, saving might just be for you.

It’s not just searching for the cheapest brand of washing up liquid that will serve you well here. There are plenty of areas where you could be saving cash, from gas and electric bills to your phone and internet tariffs, and even your car – figure out where you’re losing money and make a change.

If you’re deep into your overdraft already, you might have just given up. This kind of saving can get you out of a financial hole if you’re already struggling, and then put you on the fast track to financial independence. Whether it’s a student loan, a credit card or a car loan you’re still paying off, make sure you don’t owe anyone money.

What’s the point of spending all that time looking for the lowest-priced tine of beans when you’re going to blow a load of money on an expensive meal at the best restaurant in town? We’re not saying you should cut out all your fun, but being a bit more economical with your consumer attitude will pay off in the long run.

Check prices before you decide where to eat, cut out wasteful products and stock up on easily stored foods that won’t go out of date too fast. Instead of going to the cinema, grab the DVD when it comes out! There are loads of ways to save money that will have you becoming financially independent in no time.

Knowing your current account from your ISA will serve you well when it comes to getting the most out of your savings. Keep track of where your money is and take time to learn which banks have accounts that are offering the best investment rates. You might also want to explore investing money in property and stocks if you’re in it for the long haul!

If you aren’t already – get tax savvy! One of the most common ways for freelancers to lose money is by not being set up on the right tax scheme for them. Depending on your industry and turnover, you could be able to save money and not realise! Invest in a reliable accountant who you can trust to look after your finances so you know you’re on the best tax scheme for your business.

What are your tips for becoming financially independent? Leave your comments in the section below!